The 13th century St. Mary’s Parish church has three ancient crosses in its graveyard and was built probably with stone gleaned from nearby Whalley Nab whose presence towers over the village. In the 10th century Whalley was the capital manor of a vast land that would be later known as Blackburnshire. The ruins of Whalley Abbey dating from the early 14th century and built by Cistercian monks are well worth a visit as is the adjacent Conference House Chapel. Whalley is steeped in history, the first mention of the village can be found in Bede and the Anglo-Saxon Chronicle for the year 664. The Battle of Whalley took place on the road to Read in 1643 when Royalist forces were routed by the Parliamentarians even though they were seriously outnumbered. The area around Whalley is extremely well served with a network of footpaths.

Grid Reference SD 729 365 – for a map visit www.streetmap.co.uk and enter the grid reference

Have you got a photo anywhere on the Lancashire Triangle? Posted 22.07.2020

Suzy The Sheep At Clapham Station 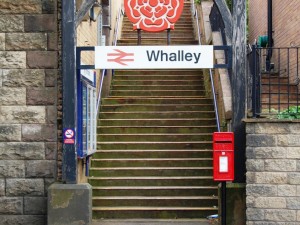 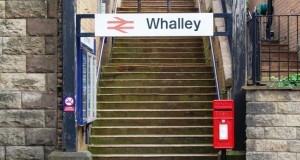