Thursday 22 October saw the ‘unveiling’ of the first of a new batch of station history posters. Caroline Holden, who joined CRL in April 2020 as a Community Rail Development Officer, took this on as one of her early projects and has been in contact with a number of friends of station groups across our area and Parbold’s history poster is the first to be installed.

Mark said; “Following a Heritage Week at Parbold Library that was organised and run by ‘Friends of Parbold Library’ which included a large number of photographs of the village including  Parbold Railway Station from various ages, I was approached by David Pryer of the ‘Friends of Parbold Station’ to see if I would be interested in contributing to a poster that was to be produced by Community Rail Lancashire (CRL) and displayed on the station platform.”

“The railway has been my working life, constructing and designing electrification schemes for national and international railways, and so I jumped at the chance and after finding a number of photographs from different eras and putting a draft of the text together for the Friends of Parbold Station to peruse, pull apart, amend and approve – which they did! – we managed to agree on which photographs should be included with the addition of a couple from John Sloane’s collection, and a brief history of the station over the years from different sources which was proof read and corrected by Tony Graham – a friend of ours who is a railway historian – and sent to CLR for final approval and production.”

“I’ve enjoyed working on the project and I think it’s a fine addition on the station to show part of the history of the Wigan – Southport line.” 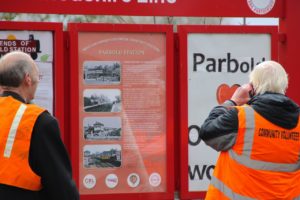 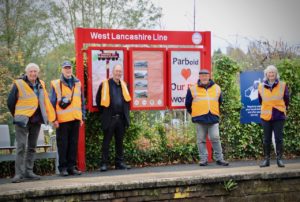 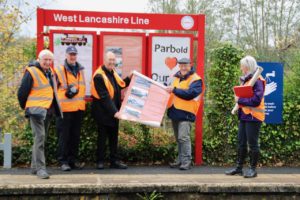 Other new posters in the pipeline are Ansdell & Fairhaven, Moss Side, Salwick, Lytham and Church & Oswaldtwistle and these will be installed on stations soon. To see the existing history posters from other stations click this link: Station History Posters