Plaques have been installed at Squires Gate and St. Annes-on-the-Sea stations on the South Fylde Line to remember one of the first station volunteers on the line. 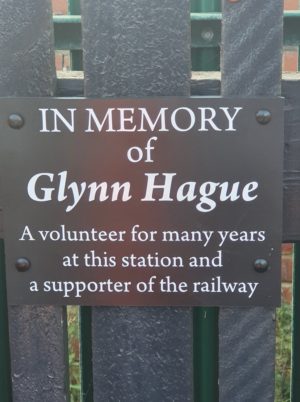 Glynn Hague, who was a station volunteer at both St Anne’s on the Sea and Squires Gate stations, sadly passed away at the end of 2019 following a lengthy illness. He was heavily involved in the Blackpool & Fylde Rail User group for many years and had also been a very active member of the Settle & Carlisle Railway.

His work at St Annes and Squires Gate was always appreciated as he helped to make the station look cared for and well maintained. He had a similar role at Squires Gate and visited that station on an almost daily basis as he lived just across the road.

The two plaques, commissioned by the Station Friends Group many months ago should have been unveiled by his wife Margaret and representatives from the rail industry but the on-going regulations concerning groups meeting etc. and people being ‘discouraged’ from using stations meant that those plans had to be put on hold.

Instead it was agreed that the plaques would go up and be acknowledged officially at a later date.

Glynn laid the foundation for the work at St Anne’s station many years ago and sadly a number of his contemporaries have also passed on. They too are recognised by plaques on the site.

To mark Glynn’s work at Squires Gate, the station friends group arranged for the plaque to be installed this week by a bench and planter combination which his wife has previously sown with bulbs though currently it’s the summer bedding that continues to provide some colour. 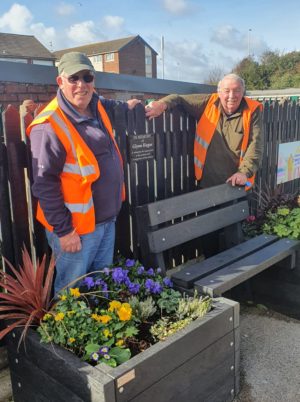 Tony Ford, Chairman of both the Friends of St. Anne’s Stations Group and the South Fylde Line CRP said: “I am really pleased that we have finally been able to commemorate the hours of station volunteer work undertaken by Glynn at the two stations in St Anne’s. Whilst he was better known for his work on the Settle & Carlisle Line and appeared in a DVD alongside Prince Charles when it reopened, his work locally should not be forgotten. He played an important role in the Blackpool & Fylde Rail User Group and was a lifelong supporter of railways.”