The Leeds-Morecambe Community Rail Partnership (LMCRP) has continued its educational work this year, with Clapham C of E Primary School’s pupils the latest to be involved.

There was an initial visit to the school in early February by the CRP’s officers, who engaged the pupils with a presentation on rail safety and the history of their local railway.

Later the same week, this was followed by a train journey to Carnforth. En route the youngsters enjoyed the activities in their Bentham Line packs.

Working on the Activity Packs on the train

At Carnforth station, the pupils looked at the station artwork, viewed the high-speed trains on the West Coast Main Line and visited the Heritage Centre to learn about the history of this important railway junction and its role in the film ‘Brief Encounter’. 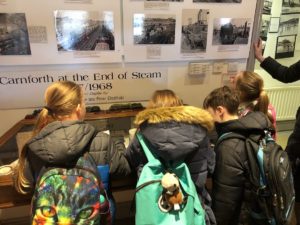 The party then returned by train to Bentham station. In the CRP’s education room at the station, surrounded by railway artefacts, the children met and worked with a local artist, Alastair Nicholson, who has assisted the Partnership on many occasions. Having first learnt several modelling techniques from Alastair the pupils and staff went on to create a unique piece of artwork on a rail-safety theme.  The colourful artwork they created was converted to a display panel for Clapham station which is 1.5 m by 1 m in size. 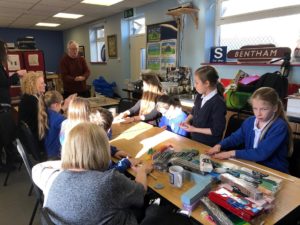 In the Education Room at Bentham Station

There are clearly elements of Clapham in the background of the design; the school, station, and viaduct, along with the River Wenning.

Reflecting on the Partnership’s work with the village school, Adam Kay, the Head of School, commented,  “Thank you for the valuable and rewarding time you have spent with our children. I am really pleased with the artwork, it looks fabulous”.